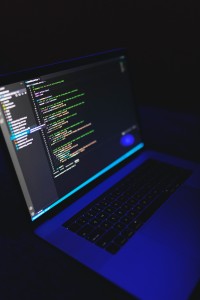 A programming language is a set of grammatical rules and a vocabulary for instructing a computer or computing device to perform specific tasks.

High-level languages such as BASIC, C, C++, COBOL, Java, FORTRAN, Ada, and Pascal are commonly referred to as programming languages.

How Does Programming Language Work?

Each programming language has its own set of keywords (words it recognizes) and syntax for organizing program instructions.

Each digit represents either an instruction or data within the program in machine code, which is a binary format consisting of ones and zeros (1 and 0).

When a programmer enters a command into their computer’s terminal, the instructions are sent to the processor, which converts them into machine code so that they can be executed.

It then translates any information generated by those commands into something humans can understand—typically English. When a user enters text into a search engine like Google, it converts the query into machine code before sending it to its servers.

It then uses machine code to process all of the search algorithm’s results before translating them back into human-readable form.

While simple in comparison to human languages, high-level programming languages are more complex than the languages that computers actually understand, known as machine languages.

There are two approaches to this:

Because no programming language is inherently superior, it is best to select one that fits a programmer’s project’s use case.

The following are the 5 most popular programming languages:

It allows websites to store and use data, access components of pages, update the contents of those components, run functions when events occur on a website, make pages more interactive, and so on.

Furthermore, it is supported by all major browsers, allowing it to reach virtually any user across multiple platforms (Windows PCs, Macs, Linux computers).

In short, JavaScript is widely regarded as one of the most important programming languages in today’s web development world.

Guido van Rossum developed Python in 1991. It is an interpreted language, which means it does not require compilation before use.

Java is a programming language as well as a computing platform. Java allows programmers to create apps for phones, desktop computers, laptops, tablets, and smartwatches.

Many of its commands are similar because it is based on C/C++ syntax. Whereas C/C++ allows developers to write low-level code for system programming, Java was created for high-level application development.

James Gosling, Mike Sheridan, Chris Warth, Ed Frank, and Patrick Naughton founded it in June 1991. However, after several name changes, it was first released by Sun Microsystems in 1996. (Oak, Green, and Java from Java coffee).

Microsoft created and maintains TypeScript, an open-source object-oriented language. This JavaScript superset extends JavaScript by adding types, classes, and modules, allowing developers to write applications for any browser or platform without additional compilation. It is used in large-scale web applications as well as popular libraries like AngularJS.

Furthermore, because TypeScript is based on ECMAScript 6th Edition (ES6), it is highly compatible with the majority of other JavaScript codebases.

If you are interested mostly in tech-related stuff then you can check out our blog for more articles and tutorials here.