Draw like a pro using the pen tool in Adobe Illustrator

Draw like a pro using the pen tool in Adobe Illustrator

This is a quick guide for anyone new to digital graphics. Coming from an old product, Macromedia Flash (which was bought by Adobe and later became Adobe Animate), I was used to drawing a line and dragging that line into a curve. Changing curves from their points was unfamiliar and took some learning.

Almost all Adobe products have a ‘pen’ tool that allows you to manipulate curves and lines. Learning how to properly use this tool will make things easier, from creating shapes in Adobe Illustrator to cutting out backgrounds for images in Adobe Photoshop.  While the tool function is about the same across all applications, here we will look at its use in Adobe Illustrator.

Like connect-the-dot drawings, the basic function of the pen tool is to connect dots, or clicks, with straight lines. Let’s make a few basic shapes.

We now have a basic closed shape like #1 shown below.

If you want to select a shape or create an open shape, holding control lets you do this.

In order to move points around, press ‘A’ to select the ‘Direct Select’ tool. The mouse pointer changes to a white arrow. In the example #4 below, we have added and moved five points to create a star. 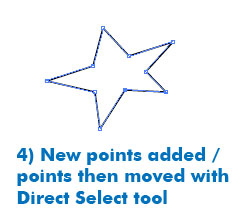 Adobe Illustrator: Example showing new points being added to a shape and points being moved to create a new shape using the ‘Direct Select’ tool.

Now you should be pretty comfortable creating shapes with straight lines in Adobe Illustrator. Let’s add some curves now. The ‘Convert Anchor Point Tool’ can be accessed directly from the pen tool or separately by pressing ‘Shift + C’. Let’s access it from the pen tool so you can make curves on the go.

Change the position and distance from the point to create curved shape. In #5 below, we created a ‘starfish’ shape by converting all of the points.

Fine-tuning curves with the Bezier handles

Notice in Example #5 that all of the selected points have lines with dots on the ends. These are Bezier handles. Dragging them around changes the angle and size of the curve. The curve is always smooth. If we want to make a sharp curve, we use the ‘Convert Anchor Point’ tool again.

Functionality in other Adobe applications

The pen tool works pretty much the same in Adobe Photoshop, Adobe After Effects, Adobe Animate and so on. If you need to cut the background out of an image, using the pen tool to create your mask is a great way to quickly create a mask and fine-tune the curve to get the perfect cut-out. Using the shortcuts and clicks, creating and editing paths in Adobe Illustrator can be quick and easy.

About the Author: Paul