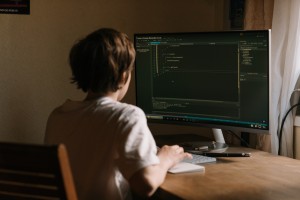 Quantum computing is a new technology that is growing quickly. It uses the rules of quantum mechanics to solve problems that are too difficult for traditional computers to handle.

Today, IBM Quantum gives real quantum hardware to hundreds of thousands of developers. This is a tool that scientists only started to think about 30 years ago.

What is Quantum Computing?

The behavior of energy and matter on the quantum level (at the atomic and subatomic level) can be understood through the application of quantum theory. The performance of particular computing tasks can be accomplished through the use of various combinations of bits in quantum computing. All of this, at a level of efficiency that is substantially higher than that of its traditional equivalents. The advent of quantum computing represents a significant step forward in the capability of computing, promising enormous gains in performance for a variety of applications. For example quantum computing excels at simulations.

Quantum computers use the unique properties of quantum physics, such as superposition, entanglement, and quantum interference, to perform computation. This adds new ideas to traditional programming methods.

Quantum particles in superposition are a combination of all possible states. They will continue to fluctuate until they are observed and measured. Consider a coin to illustrate the difference between binary position and superposition. Traditional bits are calculated by “flipping the coin” and receiving heads or tails. However, if you could look at a coin and see both heads and tails, as well as every other state in between, the coin would be in superposition.

Entanglement is when two different measurements of the same quantum particle give the same result. When qubits are entangled, they act as if they are part of the same system and can affect each other. We can figure out what the other qubits are like based on how one qubit is measured. By adding and connecting more qubits to a system, quantum computers can calculate exponentially more information and solve more complicated problems.

Due to superposition, quantum interference is the intrinsic behavior of a qubit that influences the probability of it collapsing in one direction. Quantum computers are designed and constructed to minimize interference as much as possible and produce the most precise outcomes. Microsoft utilizes topological qubits for this purpose, which are stabilized by manipulating their structure and surrounding them with chemical compounds to prevent outside interference.

How does quantum computing work?

For some ways to store qubits, the unit that holds them is kept at a temperature just above absolute zero to keep them as coherent as possible and cut down on interference. Other kinds of qubit housing use a vacuum chamber to help keep the qubits stable and reduce vibrations.

Various things, like microwaves, lasers, and voltage, can be used to send signals to the qubits.

If you are interested in more tech-related stuff then you can check out our blog for more articles and tutorials here.