Discover the app taking over the social media industry: Snapchat

Discover the app taking over the social media industry: Snapchat

Snapchat is a mobile application where users can text, call, and share pictures. You can also learn about news and discover other medias through the app. It is mainly used for sending pictures back and forth which can result in a streak. A “streak” develops when two users send each other at least one picture every 24 hours for a certain number of days. There are several creators of Snapchat who continue to improve their app based on what they think users will like. Only 27 years old, Evan Spiegel, Co-founder of Snapchat, is worth more than 4.1 billion dollars and has received offers for his company for more than 19 billion dollars. He and his fellow partner, Bobby Murphy founded Snapchat. In the world of smartphone apps, Snap is major. Despite all the success he’s gained, it did not happen overnight. The team had to persistently work on the app until it was released. The application became available on the app store in September 2011. With months of hard work, their app took off, at one point being the most downloaded app. As of August 2017, the app had 173 million daily users.

Snapchat has various features and purposes. Its main use is to take pictures and videos, and you can quickly send them to your snap contacts or post on your snap story for your friends to view. You can also save what you’ve taken on the app into your snap “memories” so you’ll be able to see and post them again whenever. You can chat with your friends too, and they will appear on a “best friend” list that only you will be able to see. It is based on who you interact with most, and it can change easily. There is a section in the app where you can click through stories of whoever you’ve added. Additionally, magazines and news stories appear there so you can stay tuned to whatever organization or “channel” you’ve subscribed to, and Snapchat will also place random stories based on which are popular or similar to your interests. 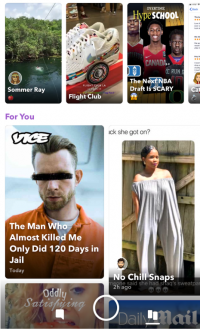 How to use Snapchat
https://www.google.com/amp/s/www.digitaltrends.com/social-media/how-to-use-snapchat/amp/

About the Author: Sofia Mughal